As show director Mitch Neuhauser says in a 2015 Film Journal article, “Let’s face it, CinemaCon lives or dies by the quality of the theatrical experience that we’re

able to deliver in The Colosseum.” BL&S’s Chapin Cutler adds, “In many ways, this is the most complex production that we do over the period of a year. ... Basically, we have to install eight to ten cinemas’ worth of equipment in a booth 26 feet wide, and we have to do it in a day and a half.” BL&S teams up with equipment manufacturer partners to transform The Colosseum at Caesars Palace in Las Vegas from a world-class live performance venue to a 4,300-seat, festival-quality movie theatre. Read the full article, “Converting the Colosseum,” by Mark Mayfield of Film Journal here [PDF].

“The Sound of the Colosseum”

2018 marked a new milestone for CinemaCon, as BL&S and QSC teamed up to bring “Dolby Atmos sound to the entire Colosseum, including the second mezzanine—which adds about 800 seats.” As Mark Mayfield, director of global cinema marketing at QSC says, “Converting the Colosseum at Caesars Palace into ‘the world’s largest movie theatre’ has always been a big job; this year...the job was even more ‘colossal.’” “Total amplifier power for the entire system exceeds one million watts. ‘That,’ concludes Mayfield, ‘is the biggest ever.’” Read the full article, “The Sound of the Colosseum: QSC brings Dolby Atmos to the entire Caesars Palace theatre” by Bob Gibbons of FilmJournal.com.

Building on success with ShoWest

The largest annual convention for the motion picture exhibition industry, ShoWest is the only international gathering devoted exclusively to the movie business. In 1998, ShoWest’s new director set out to achieve better sound and projection (including 5.1 channel stereo) than what had been presented in recent years.

BL&S had successfully presented the 5.1 format in the challenging Bally’s Events Center at ShoWest several years earlier, using its expertise in large venue 70mm presentation for Universal’s Far and Away. Impressed with their work, ShoWest’s director hired BL&S to take on technical direction for the entire convention, including its digital cinema facilities. This includes installation and support in three separate venues using the highest quality projection and state-of-the-art, high- performance sound systems.

Each of the convention venues presented unique challenges. For example, the massive Paris Ballroom had special audio considerations due to the unusual dimensions of the room. To achieve proper sound within the Paris Ballroom, BL&S installed four separate delay zones for the surround speakers and a combination of long and short throw surround cabinets, a concept devised by Larry Shaw to deliver full rich sound throughout the cavernous venue. The result is the largest Dolby Digital sound system installed anywhere in the world. It exceeds Dolby and THX specifications for audience coverage.

The event producers have been very pleased with BL&S’s results: “They’re perfectionists. They have to make the toughest group of people in the world happy and that’s execs in the motion picture industry, and they’re up to the task. There’s never a situation which can’t be addressed,” said Neuhauser. 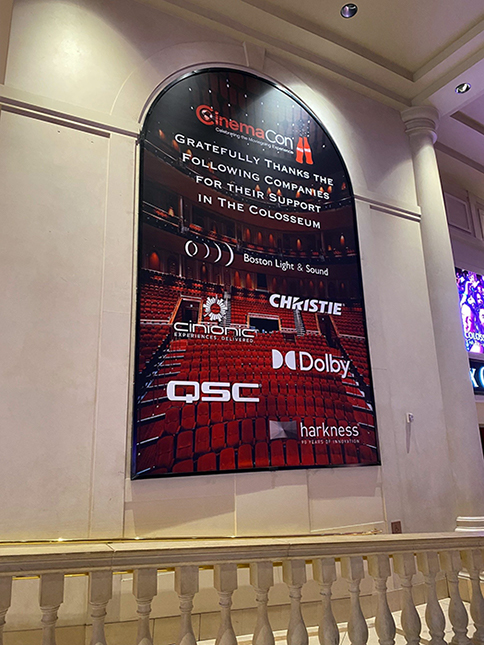 Whatever it takes – BL&S does it

“Everybody knows BL&S. Their great reputation and professionalism precedes them in the industry. Whatever’s needed to make a perfect state of the art show – whatever it takes – BL&S does it.”

Abel Gance’s silent film Napoleon is valued by film buffs today for its pioneering film techniques. Gance dabbled in color tinting, split screens, as well as Polyvision, a predecessor to Cinerama. The director filmed ultra-wide scenes three times and combined them in a wide-screen triptych.

However, the film’s commercial release in 1927 was a disaster, and Gance destroyed much of the print in despair. Years later, film historian Kevin Browlow spent years recovering 5 ½ hours of the remaining film and restored it frame by frame to its original glory.

Francis Ford Coppola was so enamored when he saw the film that he coaxed his father, Carmine, to write a score for it. When the music was completed, Coppola chose Boston Light & Sound® (BL&S) to provide technical direction for the Radio City Music Hall premiere.

BL&S Principal and Director of Engineering Larry Shaw was the technical director. Three of Radio City’s one-of-a-kind 35/70mm projectors were synchronized together by adding custom-made adapters, faithfully reproducing the triptych sequences. The event was a resounding success. Paolo Cherchi Usai, curator of the George Eastman House film archive, said, “My heart stopped when the triptych started.”

The Radio City Music Hall shows were so well received that BL&S was retained to handle additional shows at the 6,000-seat art deco showplace.

Zoetrope Studios decided to take the show on the road, hiring BL&S to ensure optimal presentation at 23 venues around the world, from Francis Ford Coppola’s vineyard in Napa Valley to the steps of the Colosseum in Rome to the Karl Marx Theatre in Havana, Cuba.

Napoleon at The Chicago Theatre

“My heart stopped when the triptych started.”

The rock group R.E.M. chose Boston Light & Sound® (BL&S) to engineer massive scenic elements for their “Monster” World Tour. Band members envisioned bathing the backdrop of their stage, the venue walls and even the audience with brilliant cinematographic art, from old Krazy Kat cartoons to swirling computer-generated patterns, to specially photographed short films, and motion x-rays. They also wanted the ability to make instantaneous image changes, resulting in a different show each night visually as well as musically.

To present this amazing array of visuals, the BL&S team custom crafted nine combination 35/70mm motion picture projection systems, each of which can project an 80-foot wide image behind the band. They built four projectors with custom pivoting optics and tilting systems and installed these on the corners of the stage so that images could be projected anywhere in the arena. It provided complete freedom of movement, much like a follow spot. Next, they suspended four remote-controlled projection systems above the audience in the lighting grid and aimed the systems at various areas around the stage. Using multi-point motors, the images could be moved while being projected. “It’s the largest use of projected images ever used as a scenic element for any live show,” said BL&S co-owner and director of engineering Larry Shaw. “This is a new concept for the theatrical event industry.”

A team of projectionists provided installation and technical support throughout the nine-month tour run, learning to disassemble and load the equipment into trucks in one hour.

With this one-of-a-kind configuration, R.E.M. audiences enjoyed an unprecedented blend of content surrounding the band. “Technically, it’s perfect,” said Willie Williams, show designer for the R.E.M. Monster World Tour. “BL&S really listened to what I wanted and built these machines, which have mirrors on them and can rock backwards, forwards, and point absolutely anywhere.”

“BL&S really listened to what I wanted and built these machines, which have mirrors on them and can rock backwards, forwards, and point absolutely anywhere.”

For Bryan Adam’s 1999-2001 worldwide tour, the musician’s lighting designer envisioned covering the stage with abstract, kinetic imagery during each performance. Typically, this type of presentation requires cumbersome projection equipment that would take up at least 8x8' of space. However, the band didn’t have the luxury of that amount of room.

They hired Boston Light & Sound® (BL&S) who designed a system utilizing a 10,000 watt light source rotated so that it pointed straight up, using a mirror to reflect the image back onto the stage. Rotating the film projection upward

resulted in a system that was compact enough to occupy theatre space behind the sound console while still providing a very bright image.

Throughout the tour, the audience enjoyed a unique concert experience, with colors “dancing” across the stage in unison with the music.