Cathedral of the Holy Cross ::

Boston Light & Sound® (BL&S) was proud to stand with Boston during the Interfaith Service for the Boston Marathon victims, their families and the public on April 18 at the Cathedral of the Holy Cross in Boston.

Dedicated in 1875, this neo-Gothic style church is home to the Boston Catholic Archdiocese. As one of the largest churches in the diocese, it serves as the main church for the Archbishop of Boston. The impressive cathedral hosts small weddings, funerals, and masses as well as the Archbishop’s mass, which draws upwards to two thousand parishioners. The archdiocese hired BL&S to create a sound system that would meet these diverse needs.

BL&S installed a sound system consisting of ten pairs of column-style loudspeakers, each properly time aligned down the nave of the church to provide clear sound as if there was a single audio source coming from the presiding speaker. They also added two mixing systems, an automatic mixer for simple, smaller events, and a manual mixer in the pew area for large masses involving organ and choir accompaniment.

Parishioners can now enjoy clearer vocals and richer sound throughout every seat in the cathedral.

BL&S continues to support the church’s AV needs during masses and other live events at the Cathedral. 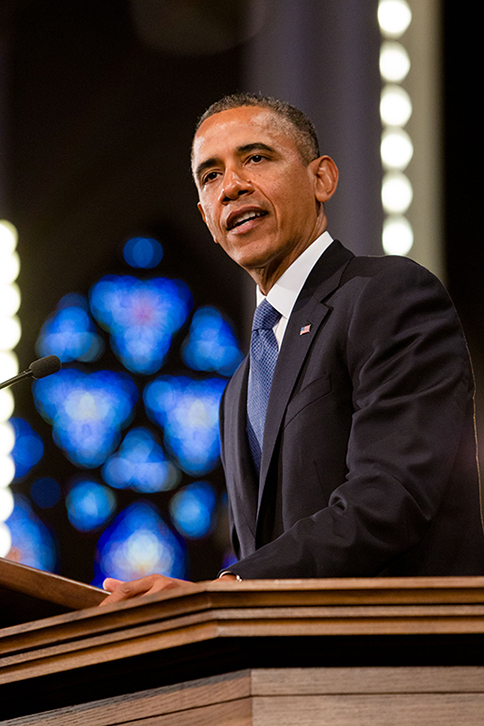 President Obama’s speech at the Cathedral of the Holy Cross

“I’ve worked with BL&S for nearly
20 years since they installed the sound system at the Cathedral of the Holy Cross in Boston. They are not only highly knowledgeable in their field, but also extremely professional in providing for our liturgical and musical needs in both religious services and concerts.”

The historic Theodore Parker Church is located in the West Roxbury community of Boston. Built in 1902, this beautiful stone sanctuary is adorned by stained glass windows, several from Tiffany Studios. The church was looking to improve sound quality while preserving the visual aesthetics of this landmark edifice.

They hired Boston Light & Sound® (BL&S) to create an audio system that provided for clear enhancement of speech, a natural sounding choir, and solid-state recording. In addition, the system needed to be designed

for both automatic mixing and operator-controlled services. To accomplish this, BL&S configured a system where all microphones fed into a manual mixer located in the rear of the church while certain dedicated inputs also fed into an automatic mixer. A simple push of a button selects the required mode. Both methods provide clear and natural sound in a visually discreet fashion that does not hinder the beauty of the space.

BL&S also installed a loop hearing assist system to assist church members who are hearing impaired. Unlike radio frequency systems, where people need to use receivers and ear speakers, the loop system is an electromagnetic induction system that’s easier to use. People whose hearing aids have “T” switches need only turn their switch on to receive the enhanced audio right to their hearing aid. For those without hearing aids with “T” switches, receivers and ear speakers can be handed out.

The client was very pleased with the result. “The sound is marvelous. Sunday I heard every word the choir sang and it sounded like a choir, not individual voices.”

“Boston Light & Sound worked with us to find the perfect setup for all of our needs, which included enhanced sound as well as a system for the hearing-impaired. The result is a flexible, versatile system that takes into account the unique nature of our sanctuary. What a joy for all of us to hear the sermons and choral music with ease. I am extremely pleased, and I highly recommend BL&S for their professional advice and performance.”

The First Church of Christ, Scientist ::

The First Church of Christ, Scientist, also known as the Mother Church, was designed to make the healing and educational system known as Christian Science accessible to everyone. Located in Boston, the original 1,000-seat church was built in 1894 using New Hampshire granite. In 1906, the church designed a 3,000-seat extension using a combination of Renaissance and Byzantine architectural concepts.

Voice intelligibility at the church was of primarily importance, with guest
readers playing a major role in public testimonial meetings and

(Photo: ©2006 The Christian Science
Board of Directors)

Like most houses of worship, the Mother Church is particularly reverberant in nature, as it was designed to project sound from the pulpit area without electronic amplification. In addition hard surfaces such as limestone further exacerbate this problem; sound waves bounce off the walls, making it difficult to direct sound to the seating areas.

The team carefully designed the church sound system to match the church’s aesthetics. Matching the color of the loudspeakers to the exact shade of limestone within the church made the 16-foot tall column all but invisible. Today, parishioners from the front pews to the back row can appreciate the spoken word.

“For the past nine years, BL&S has proven invaluable for advising us on the selection, installation, and maintenance of our audiovisual systems. The staff is extremely knowledgeable and enthusiastic about helping us achieve our presentation goals.”

Designed by the celebrated architect Arthur Gilman, the Arlington Street Church was the first public building in Boston’s Back Bay. The 2000-seat church is home to the Unitarian Universalists.

The natural reverberation of the church made controlling sound, particularly voices, quite challenging. Congregation leaders hired design team Cavanaugh-Tocci & Associates to provide clear sound reinforcement throughout the church without detracting from its pleasing historical interior.

Boston Light & Sound® (BL&S) sound engineers worked alongside the design team, installing a church sound system consisting of distributed overhead speakers mounted in the ceiling above the upper-level side pews as well as two Dutch manufactured Intellivox loudspeakers, which flank the left and right side of the pulpit area. These thin, column-style speakers are steerable in the vertical plane, allowing the sound operator to steer the sound down onto the seating area to minimize audio reflections off the ceiling and back wall.

With the new system, voices can be heard clearly throughout the entire church so the entire congregation can enjoy rich, clear sound.

“These guys have incredible integrity.”

“They do what they say they’re going to do. The way they wire and install the product is fantastic... the consultants who hire BL&S actually talk about that! BL&S is detail-oriented and they’re one of the best to have on a work site.”

The Sisters of Charity in Wellesley, MA have a senior housing complex for retired nuns. Architects Meyer & Meyer of Boston asked Boston Light & Sound® (BL&S) to design a sound system for the complex’s chapel. BL&S transformed a traditional rectangular chapel into a more intimate space by bringing the altar area into the seating area with fan-shaped seating, as with a thrust stage. BL&S recommended a system that covers the seating areas with clear, intelligible sound without creating feedback from microphones in the sound field. The careful selection and positioning of loudspeakers along with system tuning gave the clients the optimal sound quality and visual appearance.

Rave reviews from the congregation

“Zeke, Just a note to express our appreciation for all the great work you and Boston Light & Sound put forth designing and installing the new audio system in our sanctuary. We are delighted with the results of that effort and have received rave reviews from the congregation. I made a special effort to speak to several folks that have hearing difficulties and they too add their positive vote indicating they now hear every word.”